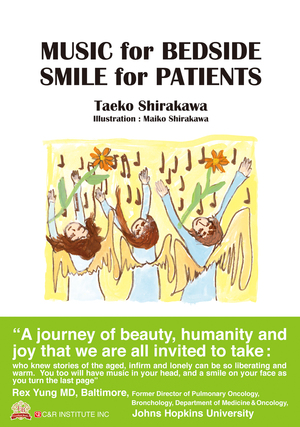 MUSIC for BEDSIDE SMILE for PATIENTS（英文版）

The amazing power of music changes the patients’ faces one after another! Wonderful and heartwarming stories that really happened in a hospital in a city close to Tokyo.
One day, a hospital concert was whimsically organized by a woman doctor. Not only she but also all the hospital staff saw the amazing power of music that brought smiles to the patients. Thereafter, they repeatedly hold the original unique concerts. Duet by the patients and the doctors. Singing together with whole the audience, etc. Vigorous and happy smiles of the patients, singing on a stage with full dress up! One patient was released from the strong lower back pain after singing her most favorite song.
The woman doctor, who had recognized the great power of music, strongly wished to learn the piano again after long interruption.
This book is the letter to her piano teacher to explain the reason why she wanted to take his piano lessons.
You will find impressive stories of various patients who really enjoyed music in her hospital.

●Chapter 1 the reason why I started the piano again
●Chapter 2 the amazing power of music ? the second concert ?
●Chapter 3 the “Homework” from Ms. Chikako Masukawa
●Chapter 4 “Here is my Happiness”
●Chapter 5 the daughter’s wish
●Chapter 6 the Autumn Concert ? celebration for long life ?
●Chapter 7 “Happy Birthday”
●Chapter 8 the melodies of the “nurse call” really are so wonderful!