Feature 1: “New Common Practice” in the Age of Smartphones and Social Media

SNS communication is possible anytime anywhere with the use of a button-less touch device. Was this now-daily routine imaginable even a few years ago? Just as common practice changes over time, “common practices of the Web” go through constant changes. What is common practice required for Web creators today? This feature raises issues of Web common practice vital for the age of the smartphone and social media from a number of perspectives. 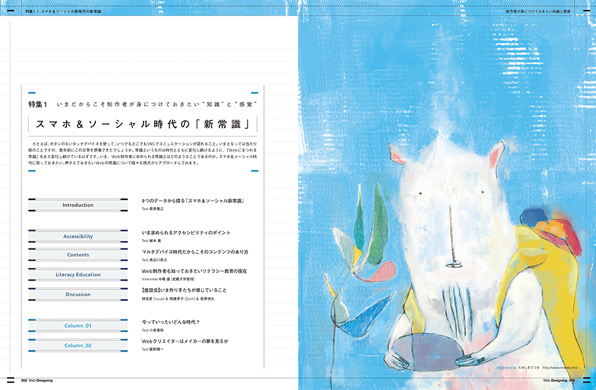 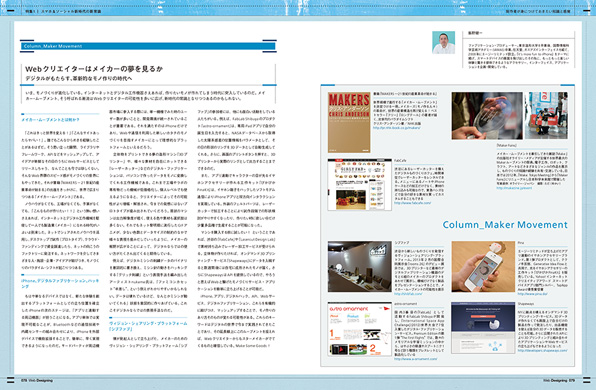 Web, Image, Projection Mapping…. They Break New Ground with the World of Expression.

In the world of expression, age and experience don’t really matter. What does are excellent ideas, cultivated skills and intrinsic taste. The so-called digital native generation, which has interacted with Internet and Web like air and water since early adolescence, are now unleashing their talents in a wide variety of fields. Some are active in Web’s mainstream, while others regard Web as one of the arenas of expression. Their creativity changes the world of expression. 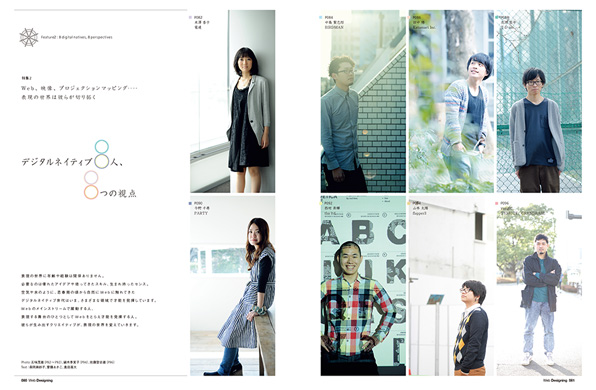 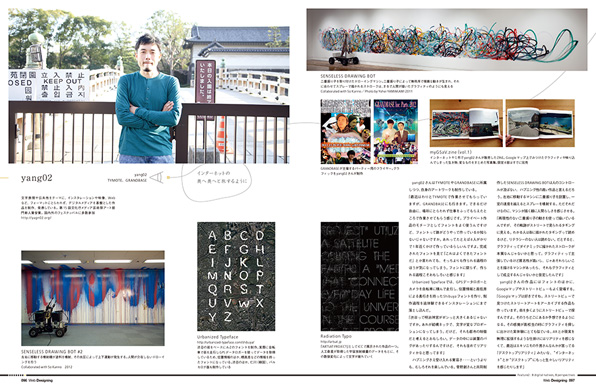 Easily making a full use of technology, OHNO launches a “world tour” from his home using Ustream to actualize GIG involving people from all over the world. Such a style loosely links to the creativity of an art director “OHNO Shingo.” We close in on the reasons behind the versatility of this artist who engages in a wide spectrum of creative activities ranging from innovative projects like “Nike Music Shoe” and “Cornelius CM4” to “Nadeneko Oronyain,” which earned wide acclaim among housewives. 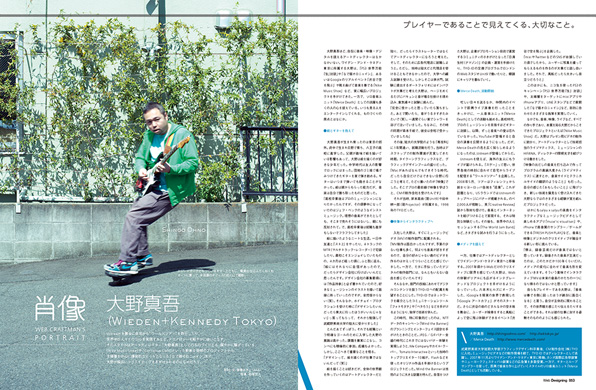 Tour De Graphique - A Challenge in the Time of One CD -

SAKATA Kazumi is a “connoisseur,” who discovers “beauty” in things that no one pays attention to. Fascinated by Sakata’s unique discerning eye, many people regardless of age or sex enjoyed his exhibition “Old Folk Craft: The Way Ahead, SAKATA Kazumi’s 40 Years” held last year at the Shoto Museum of Art. The show earned a great deal of positive response particularly from creators. How does he select one among so many? We visited his thrift shop Furudogu Sakata in Mejiro, Tokyo. Has Web in China Changed in Past 2 Years?

It’s been 2 years since the author MATSUMURA started his research on Shanghai. How has the environment surrounding the city changed from 2 years ago to the present? In conjunction with the Web campaign launched in China, we report on the changes that Matsumura has witnessed in Shanghai. 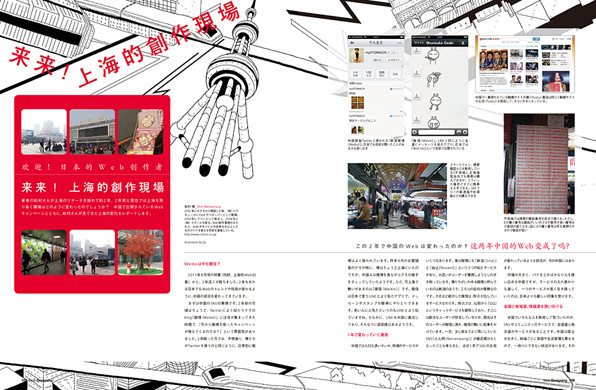 Unique municipal campaigns such as Hiroshima Prefecture’s “Oshii! Hiroshima-ken” and Kagawa Prefecture’s “Udon-ken” have recently garnered much attention. As part of this trend, Okayama City in Okayama Prefecture, which is adjacent to Hiroshima and also faces Kagawa with the sea in between, started a campaign that centers on Web movies and parodies the aforementioned municipalities. Since the release of the first movie featuring the mayor of the city, the campaign spread instantaneously, and now it’s attracting attention in both online and offline. How did it achieve such great dissemination? We talked to five production team members, SHIONO Koji, ISHIDA Yasunari, TADA Hiroto, MORI Yoso and MOTOOKA Yoshiaki. Founded just the end of last year, Mujuryoku Co., Ltd. is a creative team consisting of only a few members including ROKUTAN Takayuki and SASAKI Hiromasa. KOYABU Kazutoyo on the other hand is a comedian and a leader of time-honored Yoshimoto Shinkigeki. Before we knew it, their discussion lead to the essential nature of entertainment...! If you read news on Tohoku using this Smartphone application, seeds are sown and flowers grow. When flowers bloom on the application, flowers with your name attached to them get planted in a field of Tohoku. Such a wonderful project has developing as we speak! The team members of the application shared their passion for bringing smiles to the people of Tohoku with us. 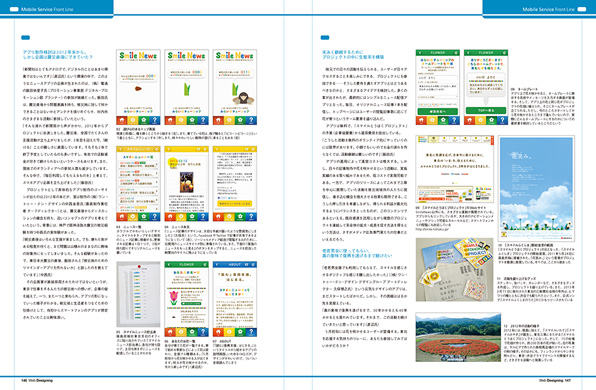 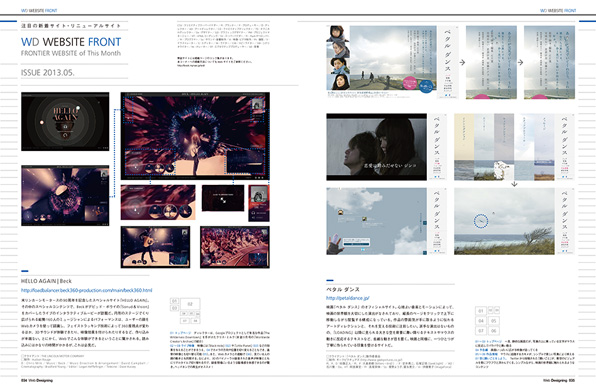 From the Data of Web Designers Report: "The Landscape of this Job"

What is A/B Test that Evaluates Design and UI?
Text: OGAWA Taku

The Secrets of Digital Marketing

Will Interest in Politics Increase once the Ban on the Net Elections is Lifted?
Text: HAGIWARA Masashi

It’s already been a month since Twitter Bot “KEIGO” started tweeting based on the past 13 years of “Web Designing” texts he has memorized. We diagnosed him from various directions by taking a close look at his activities. As you continue to use various Internet services, it gets harder to manage a bunch of IDs and passwords. What we suggest this time is a super-easy and super secure authentication system, which will probably be in use in the near future. For real?